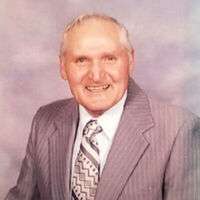 He was born April 12, 1933, in Salina, Kansas, the son of Fred and Philomena (Rome) Richmeier.  On April 15, 1952, in Hays, Kansas, he was united in marriage to Mary Jean Aich, who survives.  Also, surviving are one son, Glenn Richmeier, and his wife Jennifer of Brooksville, Florida; two daughters, Lisa Bascue and her husband Brad of Manhattan, Kansas and Brenda Spain and her husband Danny of Aurora, Missouri; nine grandchildren and nine great-grandchildren.

E.J. graduated high school at St. Joseph Military Academy in Hays, Kansas, and then graduated from Kansas State University in two years and nine months with a four-year degree, a Bachelor of Science in Agriculture.  He was a District Conservationist employed by the USDA Soil Conservation Service.  He was a member of Holy Family Catholic Church and Holy Family Men’s Club.  In 1958 he joined the Knights of Columbus earning the 4th Degree, also served as Past Grand Knight and Past District Deputy.  He was also a member of the Lions Club.  E.J. was a notorious storyteller and had an amazing sense of humor.  He loved spending time with his family and friends and was a loving husband, father, grandfather, and great grandfather.