Formal Catholic education in Hays, under the leadership of the Sisters of Saint Agnes and the Capuchin friars began in the 1880’s, soon after the Volga German immigration to Ellis County.  There was, however, no program beyond elementary school for many years.  After much discussion, fundraising, construction, and some disappointment, Hays Catholic College (HCC) was opened by the Capuchin Franciscans with 53 students (all boys) in September of 1908.  The college shared space with the parish elementary school in the new building on Thirteeth Street across from St. Joseph’s Church.   A classical course of study was offered for those planning to enter the priesthood or other profession.  A commercial course of study was available for those who saw their future in the business world.  Capuchin friar Father Henry Kluepfel was the first director.

When a residential program was added in 1910, enrollment surged, and it became obvious that more room would be needed.  In 1914, the parish elementary school moved to a new building on Fort Street and Hays Catholic College took possession of the entire Thirteenth Street building.  More growth was anticipated,  and plans were made to develop a campus on the west edge of Hays.  By 1921 a significant amount of financial support had been pledged for the expansion and in 1925 the cornerstone for a new building was laid.  Periodic crop failures delayed collection of many pledges, however, and it was not until 1931 that the newly renamed St. Joseph College opened with an enrollment of 199 boys (high school and junior college) and a faculty of nine Capuchin friars and seven laymen.

Meanwhile, Agnesian Sister Remegia Nader began visiting businessmen and parents about establishing a secondary school for girls.  Girls’ Catholic High School opened its doors in the fall of 1918 in two frame buildings on Fourteenth Street which became known as “The Shacks.”  By 1921 the enrollment had climbed to 19 students and Sr. Remegia began a term as principal which would last for 31 years. 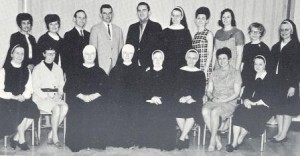 The next year GCHS was fully accredited by the Kansas State Board of Education.   In 1931, when the boys moved to the campus west of Hays, the girls moved into the former Hays Catholic College building.  The school remained there for the next 30 years. Growing enrollments during the 1950’s prompted pastor Fr. Alfred Carney to raise funds for a new building with a capacity for 400 girls on a Hall Street tract adjacent to the boys’ campus.  When the new school was dedicated in 1961 Girls’ Catholic High School became Marian High School.  (The photo above shows the Marian High School faculty for the 1968-69 school year.)

In 1932, the year after the boys moved into their new building, an ROTC program was added and the name was changed to St. Joseph’s College and Military Academy.  In 1937 the school 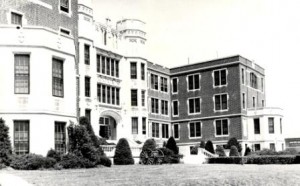 received accreditation from the North Central Association of Schools and Colleges and has maintained that accreditation to the present.  In 1952 the junior college program was dropped and the boys’ school became simply St. Joseph’s Military Academy.  (The photo at right shows the main administration and classroom building soon after it was completed.)

Another thread in TMP-Marian’s history began in 1948 in Victoria, a small community about 10 miles east of Hays. 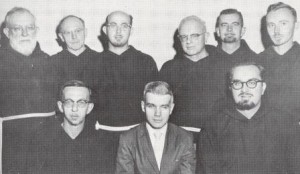 Capuchin Fr. Claude Vogel began St. Francis Seminary, a high school program to prepare students for college seminary work and eventually the Catholic priesthood. Over the next 22 years, St. Francis Seminary provided 632 men at least a part of their high school education and can count dozens of priests and several bishops as alumni.  (The photo at left shows the SFS faculty for the 1961-62 school year.)

By the end of the 1960’s it was decided to end the military program at St. Joseph’s Military Academy and to provide high school seminary education in a less separate environment.  In 1970, the seminary and the military academy merged, without the military program, and became Thomas More Prep, a college preparatory school with an emphasis on Christian leadership.

Throughout its history, the friars of the Capuchin order and the sisters of the Congregation of Saint Agnes provided a major part of the staffing and leadership of the schools which eventually became Thomas More Prep-Marian.  As the numbers of members of those religious orders diminished over the years, lay faculty and leadership have become the norm rather than the exception.  Governance of the school passed from the Capuchins to the Diocese of Salina in 2003.

This summer of 2008 marked the completion of one full century of secondary Catholic education in the Hays area.  Year after year hundreds of faithful alumni return for homecoming reunions to celebrate the difference a Catholic education has made in their lives.   The current faculty and staff continue to provide an opportunity for young people from diverse places to gain a secondary education rich in academic competence, rich in effective Christian leadership, and rich in personal spiritual growth.

Beginning with the 2012-2013 school year, TMP-Marian included grades 7 and 8, as well as, the high school grades 9-12, as has been the case for many years.  The expansion was prompted by the USD #489 decision in June of 2011, to discontinue operating Kennedy Middle School at the end of the 2011-2012 academic year.  Over the course of that school year, the Heartland Parishes approved the addition of grades 7 and 8, at the TMP-Marian campus.  (update by R. Brull, July 2012)