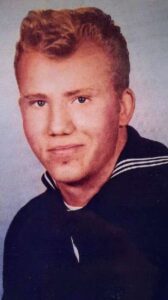 James (Jake) will be remembered for his love of family, church, golf, and over three decades of service to Hays Medical Center.

He was a U.S. Navy veteran, serving on the U.S S. Forrestal and U.S.S. Ranger.

He was preceded in death by his beloved wife, Virginia Lee on February 19, 2017; his parents; and nine siblings, Bridget, Ben, Barbara, Ann, Helen, Wilma Jean, Jake, Ralph, and Robert.