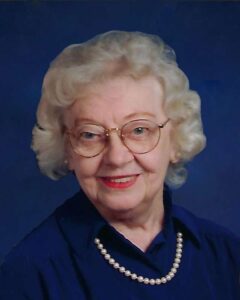 Mildred Staab Pfannenstiel, 94, of Leawood, KS., formerly of Great Bend and Hays, KS., died peacefully on June 27, 2020. Millie was born Sept. 18, 1925, in Catharine, KS, to John C. and Christina (Schmeidler) Staab. She grew up on a farm near Catharine, northeast of Hays.

Upon returning to Hays, she worked at the Hays Daily News as a copy editor. In 1949 she married Alvin F. Pfannenstiel and they were married nearly 65 before Al’s death in 2014.

Al and Millie were also business partners, owning two grocery stores, one in Ellis, KS, then Al’s College Market in Hays. Following that, they owned and operated the Airliner Motel in Great Bend, KS, for 18 years. They shared in many of the day-to-day elements of a owning a business. It could be stated that Millie managed the internal details, while Al handled the operations. They retired in 1986 and resided in Great Bend until 2005 when they moved to Leawood. They also continued their involvement in the farming business with the Staab family.

Millie was a devout follower of her Catholic faith and most recently a member of Cure of Ars Church (Leawood). She was a former parishioner of St. Patrick’s in Great Bend and an active member/officer of the Daughters of Isabella.

Millie is survived by son Don and daughter-in-law, Mitzi Martin Pfannenstiel, and two grandchildren, Kenedy and Campbell Pfannenstiel of Leawood; brother Francis “Frank” Staab and sister-in-law Kathy Staab of Hays; and many nieces and nephews. She was preceded in death by siblings and their spouses, Mary (Clarence) Bell, Benno Staab and Virgil (Wilma) Staab. Also, preceding Millie in death was sister-in-law Myra Staab.

A Mass of Christian Burial will be at 10 a.m., Monday, July 6 at St. Catherine’s Church, Catharine, KS (seven miles northeast of Hays). Burial will follow at St. Joseph’s Cemetery, Hays.

The family would like to thank the caring staff of The Forum, where Millie resided the last 4 years; and also Ascend Hospice.

In lieu of flowers, the family suggests making donations to St. Teresa’s Academy (Cares Program), c/o The Pfannenstiel Family, 5600 Main, Kansas City, MO 64113. Condolences may be left in the guest book at www.keithleyfuneralchapels.com or emailed to keithleyfuneralhomes@gmail.com