Thomas More Prep-Marian is pleased to announce the new faculty and coaching staff members that will be joining the Monarch Family for the 2016-2017 academic year.

The departure of John Montgomery at the end of the past school year left a vacancy for Head Monarch Football Coach and High School Business Teacher. The new Head Coach of Monarch Football is Jason Cauley who most recently was head coach at Moanalua High School, a 2,000-student school near the southern shore of Honolulu, Hawaii. 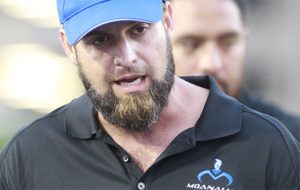 Cauley is a native of Mobile, Ala. and has been playing and coaching football all his life. Following a successful high school career, Cauley played at Mississippi College before transferring to the University of West Alabama. Following the events of 9/11, Cauley enlisted in the U.S. Army and served as a Cavalry Scout (19D). After his time in the The Army, Cauley returned back home to work as an assistant for 7A Murphy High School in Mobile on the coaching staff of Rick Cauley, his brother. After a move to Hawaii, in 2011, Cauley served as Offensive Coordinator and QB Coach for Moanalua, then filled that same role for Kapolei High School for two years before taking the head coaching position at Moanalua. Over the years, Cauley has earned many honors and achievements, both as a player and coach, including multiple playoff appearances. Cauley, his wife, Amanda, and their two children, Liam (4) and Layla (2), will be moving to Hays to join the Monarch Family this summer.

“I grew up around the game, and I value the chance to help young men learn the game and the values of respect, excellence, integrity, service, loyalty, and tradition that it teaches. I knew I wanted to coach in a private, Christian environment,” Cauley said. “Hays is just the kind of family-oriented community we’re looking for. I’m excited to be a part of the Monarch family from our alumni roots to our current and future students and families.”

In addition to his coaching duties, Cauley will teach social studies, weights, and study skills classes at TMP-Marian.

Business classes will be taught by Sharris Coomes of Hays. Coomes has 17 years of experience owning and managing her own businesses and seven years managing a newspaper. Most recently Coomes has been a substitute for Unified School Districts #325 in Phillipsburg and #270 in Plainville as well as administrative assistant at APAC in Hays. Coomes has a BS in Business Administration with an emphasis in human resources and a minor in political science from Fort Hays State University. Coomes is also currently pursuing a MS in Education through FHSU. She is a licensed pilot and is a member of the National Society of Leadership and Success.

“I was fortunate to have attended Catholic schools in my grade school years and wanted my children to have the same wonderful opportunity,” Coomes said. “My family and I moved to Hays in the summer of 2014 so our triplets could attend Holy Family and go on to TMP-Marian.”

The role of art teacher will be filled by Nancy Flax who retired from Hays High School in 2015 after 15 years as an art instructor at the school. Flax has a BA in Art Education from the University of Kansas, an MA in Drawing with minor in ceramics and a MFA in Sculptural Ceramics with minor in drawing from Fort Hays State University. Flax has taught painting and design fundamentals at Hays High and a variety of media through her employment as the art teacher for Hoisington and Ransom schools.

“I believe the continued education and development of education of personal work in art helps me to share the enrichment I’ve received in both skills and exposure with the students I teach,” said Flax. “I have missed teaching art, and look forward to continuing to share my knowledge about art with our youth.”

A new program of study in Agricultural Science will be offered for the coming academic year under the instruction of Jay Harris. Harris has worked as an agronomist for Koch-Agri in York, Neb. and Associate Professor of Agriculture for Dodge City Community College. Most recently, Harris has served as a coach and substitute teacher in USD #303 in addition to being a business manager for Western Edge Veterinary Center in Ness City as well as a farmer in his own right. Harris has a BS and MS in Agronomy from Kansas State University.

Principal Chad Meitner said, “From the beginning, our community has been based in agriculture. By offering courses specific to those who want to pursue higher education and careers in veterinary medicine, agricultural chemistry, agri-business, and more, we will enhance contributions to the local and regional community and economy through our talented and dedicated graduates.” Meitner continued, “Jay will be a valuable asset to our school community beyond his classroom duties as demonstrated by his continued dedication to his parish and Catholic education.”

Another coaching change this fall will see current TMP-Marian Math and Social Studies Instructor Shea Koerner take on head coaching duties of the boys’ soccer program. Koerner, who grew up in Texas and taught in Chicago Public schools prior to joining the Monarch family, has always been a fan of the game and has most recently served as an assistant on the boys’ soccer coaching staff.

Questions regarding the faculty and staff at TMP-Marian can be directed to Principal Chad Meitner at the school.