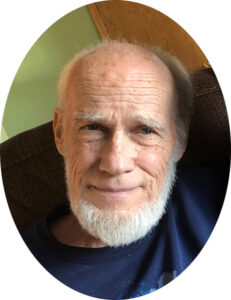 Paul Joseph Beaty, (of Superior, NE) born on May 11, 1947, in Lincoln, NE to Thomas and Adeline Beaty. He departed this life into the arms of his Savior on Monday, November 4, 2019. He had 1 older sister, Judy; one older brother, Thomas Jr.; one younger brother, John.

His parents moved to Superior when he was a baby and he was raised in Superior. His father owned and operated Beaty Jewelry on Main Street. His mother was an RN at Broadstone. He attended Grade School in Superior, NE, and Hays, KS at St Joseph’s Military Academy for the 4 years of High School. He attended 2 years at Milford NE Trade School for Diesel Mechanics, and proudly served in the Army in the Corps of Engineers during the Vietnam war. He was honorably discharged.

Paul worked in various places in Superior and Deshler in diesel mechanics and was considered good at his trade, with few comebacks. Later in the years, he worked as a sales clerk for the farm/tractor store on the east of Superior.

Paul’s interests were varied, particularly liking airplanes, diesel mechanics, classic cars, computers, motorcycles, classical and 50-60’s music (loud) to which he played his air guitar, his teenage motor scooter Clyde and visiting with friends for long periods of time! He was a jack of all trades and liked using his talents to help his friends. He was always looking for an opportunity to give to people, even if it was his last dime. He loved His Lord and God and made no small ado about this.

Paul was disabled in 2001 with a broken back and spent his years of retirement living in Superior. Even while disabled he stayed active keeping up with family/friends via telephone, skype, and computer chat. To the very end, he would invite everyone in for coffee and visits, any hour of the day or night. Paul just did not know a stranger. At least not for very long.

Preceding him in death were he and Audrey’s son Samuel by miscarriage, his parents Thomas Sr. and Adeline; his mother and father-in-law Jack and Betty Bower; his sister Judy; his son Daniel; and his granddaughter Adeline.

Many will miss his constant orneriness: his wife, Audrey of Superior; his daughter Kristie and husband Bill McDonald of Aurora NE (and 5 grandchildren); his daughter RoseAnn and husband David Platt of Franklin NE (and 3 grandchildren), (1 great-grandson); his grandson Isaac of Superior, by his son Daniel; his son Japheth and wife Kyra of Edmonton, Alberta CANADA; his brothers Thomas Jr. Beaty of Salem, Oregon, and John Beaty and wife Mary of Madison, Wisconsin; his brother-in-law Jim Slominski of Falls City NE; his brother in law Rod Bower and wife Deb of Bloomington NE. Also a host of other cousins, nieces, nephews and family, friends, neighbors, co-workers, acquaintances.

A viewing will be at the Williams Funeral Home in Superior, NE,  Thursday, November 7th. Please sign the guest book and leave a note/story on experiences with Paul. The family would appreciate your notes. No flowers, please.

Funeral service will be conducted Friday, November 8, at 10:00 am at Valley Worship Center Church where Audrey is the Pastor and Paul attended faithfully and was the bell-ringer. Pastor Dave Wilson will be officiating.  He will be buried with full military rights in the Riverton, NE cemetery where his body will be laid to rest until the coming of our Lord in the clouds.  Condolences may be sent to the family at wmsfh.com.  Williams Funeral Home of Superior, NE is in charge of the arrangements.