“THE LEGACY” of Jacob and Anna Maria Schmidt 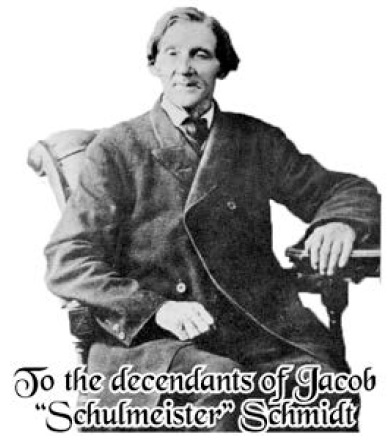 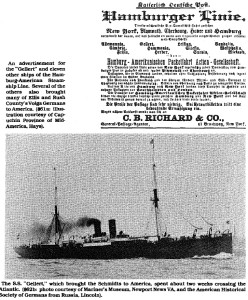 If you received a letter in the mail about the “Schulmeister,” you are a direct descendant of Jacob “Schulmeister” (Schoolmaster) and Anna Maria (Matz) Schmidt who emmigrated from Katharinenstadt, Russia to Kansas in pursuit of land, religious and political freedoms, and opportunities for themselves and for their descendants.  You are a part of their family.  In June 1876, 139 years ago this month, Jacob and Anna Maria boarded a steamer on Russia’s Volga River with their six living children, three daughters-in-law, and five grandchildren.  As their village of Katharinenstadt disappeared from view, Jacob led his family in singing Gott ist unsere Zuflucht und Stärke (God is our Refuge and Strength).

More than a year of genealogical research spearheaded by the Alumni Association of Thomas More Prep-Marian (TMP-Marian) has yielded a list of nearly 2,500 descendants of Jacob and Anna Maria Schmidt. This letter has been sent to more than 900 currently living family members.  Jacob and Anna Maria’s legacy, a legacy of faith, education, and leadership, lives within you.  Their story is part of your story.

“Who we are cannot be separated from where we’re from.” 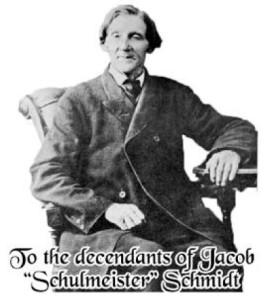 During the lives of Jacob and Anna Maria, they served as baptismal godparents and confirmation sponsors for over 100 children in Russia and in Kansas.  Their legacy is further enhanced by descendants who entered the religious orders.  About 10 entered the priesthood, and over 20 entered the convent.  Jacob’s progeny include Bishop Firmin Schmidt O.F.M. Cap. who graduated in 1938 and 1940 from Thomas More Prep-Marian’s predecessor schools, St. Joseph’s Military Academy (SJMA) and St. Joseph’s College.  Also among those entering the religious life were Fr. Paulinus Karlin, O.F.M. Cap., SJMA class of 1935 and St. Joseph’s College class of 1937 and Fr. Charles Polifka O.F.M. Cap., SJMA class of 1963. Fr. Charles also served as school president in the early 1980’s when Thomas More Prep merged with Marian High to become TMP-Marian.

We, as alumni and friends of TMP-Marian, have a vision to meet current challenges and significantly contribute to continued excellence and future greatness.  A portion of the fourth floor of TMP-Marian will be developed as an alumni and endowment center to complement the existing structure, facilitate growth, improve facilities, and support a growing endowment. Here we will honor those who began our journey and provide for generations to come.

Our lives would not be what they are today if it had not been for SJMA, GCH, St. Francis Seminary, Marian High, TMP, and TMP-Marian.  The top notch education we received there, as well as the guiding ethical principles, have been a strong compass in our work, our families and communities.  The Capuchin Franciscan Friars and Sisters of St. Agnes provided us a strong foundation for our faith; to them we owe our sincerest gratitude.

-Engraving on the Cornerstone of TMP-Marian

The school has a rich history.  It began with junior college, added and then eliminated military instruction, and merged with St. Francis Seminary and Marian High School.  Now the school numbers nearly 400 students and continues to provide an education focused on spiritual growth, academic excellence, and leadership formation, values that the “Schulmeister” espoused more than 150 years ago along the Volga River and brought with him to America.  Many of those who have graduated from these schools served proudly in defense of our country.  Remarkably, many of our family served as early as World War I.  They were willing to give their lives in defense of their new freedoms only a few short years following their arrival in America

Contributions to TMP-Marian in recent years have allowed for important improvements.  The school’s endowment has current assets nearing $7 million, significantly aiding the school’s financial stability. The Marian Chapel has been vibrantly remodeled.  The school serves grades 7-12 with the addition of the junior high program in 2012.  A new elevator provides easy access to all floors.  Modern AC and heating has been installed, and although the building is 84 years old, its solid construction is a testament to the longevity envisioned by its founders.

Currently, TMP-Marian needs to remodel the fourth floor, where resident students and Capuchin Friars once called home.  The vision is to use this floor to develop an Alumni and Endowment Center, to meet the challenge of our growth and efficiency of the staff.

Advancement Director Jeff Brull ’94 said, “Excellence in academics, spirituality, and leadership have always been at the core of TMP-Marian’s plan. This reclamation of the top floor will make an enormous difference to our facility, students and academic reputation. It will make a statement to all who see it that we have our roots here in Kansas, and we’re going to continue doing what we’ve done for generations. The vision of the ‘Schulmeister’ and the mission of our school are one and the same.”

We want to ensure that the future plans are worthy of our history.  Those who have helped to plan and provide for this project to date include: Betty ’52 (Polifka) Schmeidler, Allen ’71 Schmidt, Marion ’49 Schmidt, Don ’51 Schmidt, Jerry ’61 Schmidt, Adolph ’50-’52C Schmidt, The Robert and Pat Schmidt Foundation, Fr. Blaine Burkey, O.F.M. Cap. and the Alumni Association and Endowment Foundation of TMP-Marian.

Let us all understand SJMA, GCH, St. Francis Seminary, Marian High, TMP, and TMP-Marian did so much for us and for our family to meet our challenges. Let’s hope we can continue the same for the coming generations.  The plan is to honor the legacy of our family’s ancestry by naming the alumni and endowment center after Jacob Schmidt, the “Schulmeister” from Catherine, and his wife, Anna Maria, to honor the strong Catholic faith and leadership they brought in 1876 to Catherine, Kansas and the Hays area.  Upon arrival from Russia, Jacob recognized the need for the community to continue to practice its faith although no Catholic priests were available.  Jacob took responsibility for leading the settlers in their worship services.  A teacher in Russia and in Kansas, he taught children the three R’s and the Catechism from his own home. He became the choir director and organist for church services and was the first postmaster in Catherine.  Jacob was a gifted person of God who demonstrated great leadership and vision. Upon Jacob’s death in 1906, an article in a German-American newspaper summarized his legacy:

On Wednesday, 3 January, Jacob Schmidt one of the best known and oldest settlers strengthened
with the Holy-Sacrament of the dying passed into the hereafter.  He was a man of highest moral
character who knew perfectly well what he was about and walked in the way of the Lord.

This family project needs your help.  We hope you feel strongly compelled to ensure this continuing legacy tradition in the Catholic community of Ellis County. Currently we need $250,000 to secure naming rights to the alumni and endowment center.  If 500 gifts of $500 are made, we will have reached our goal. As a fifth generation descendant of Jacob and Anna Maria, we ask you to make a gift on behalf of your family, in memory of a cherished departed family member, or as a gift for your children so they can be listed on the donor wall.  Please join us in helping to secure the legacy of the “Schulmeister” and his entire family by supporting the remodeling of the Fourth floor at TMP-Marian where our family history will be preserved as part of the new alumni and endowment center.

“Teamwork is the fuel that allows common people to attain uncommon results.”

Due to the incredible size of our family, a digital display will showcase the family tree as well as a listing of each family contributing to this project.  If you would like to make additional contributions under your children’s names or in memory of deceased family members, their names will also be included as contributors on the display.

The Alumni Association of Thomas More Prep-Marian has conducted extensive research on the descendants of Jacob and Anna Maria Schmidt, and an updated family tree will be a part of the display should we reach our goal.

For questions about this project, please contact Troy Ruda at 785-621-5427 or email rudat@tmpmarian.org. If you are in a position to make a major gift in support of the project in the form of cash, gift of stock, real estate, grain, or other asset, please also contact Troy who will help guide the process.