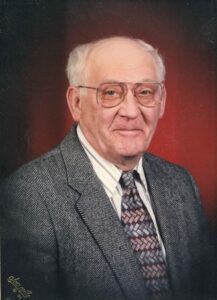 He was born March 5, 1931 in Catharine, the son of John C. and Christina (Schmeidler) Staab.  He attended school in Catharine and graduated from Hays High School.  On June 13, 1953 he was united in marriage to Wilma T. Pfannenstiel in Hays, and they celebrated 51 years of marriage before she preceded him in death on January 3, 2005.  He was a farmer, served in the National Guard, and was a member of St. Joseph Catholic Church and the St. Joseph Third Degree Knights of Columbus Council #1325.  He was also a member of the Kansas Livestock Association, Kansas Polled Hereford Association, American Agriculture Movement, American Hereford Association, Ellis County 4-H Fairboard, Young Farmers, and an Ellis County 4-H Junior Leader sponsor.  Virgil enjoyed working, traveling to cattle shows in various cities, going to church picnics, and attending county fairs to follow his children, grandchildren, and great grandchildren with their various 4-H projects.

He was preceded in death by his parents, his wife; Wilma, a grandson; Kevin Staab, a great grandson; Landry Robben, a brother; Benno F. Staab, and a sister; Mary Bell.

Mass of Christian Burial will be at 10:00 am on Saturday, June 13, 2020 at St. Joseph Catholic Church.  Burial will follow in St. Joseph Cemetery.  Visitation will be from 4:00 pm until 8:00 on Friday at the church and from 9:00 am until 9:45 on Saturday at Hays Memorial Chapel Funeral Home.  A vigil service will be at 6:30 pm followed by a Knights of Columbus rosary at 7:00 pm, both on Friday at the church.  Memorials are suggested to St. Joseph Church, in care of the funeral home.  Condolences and memories of Virgil may be shared with the family at www.haysmemorial.com