It was a great night of wrestling for the TMP-Marian Monarchs Thursday night.  The team traveled to Hoisington for the MCAA Duals tournament.  As a team, they placed second going 4-1 with their only loss to the Hoisington Cardinals with a final score of 51-24.

Pulling out the second place finish wasn’t easy for the Monarchs.  In fact, it was as close as losing one match.  “The Larned dual came down to the last match which Nick won and secured second place for us,” said head coach Dakota Hayes.

“We wrestled well and showed that we can win close matches and duals,” said Hayes, “The team really pulled together and proved they could do it.” 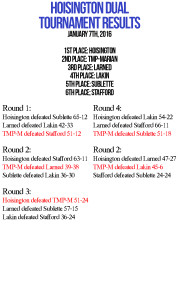