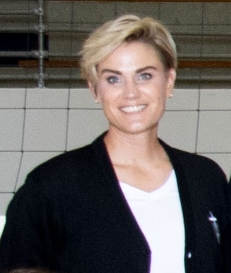 Natausha Dreher, who amassed 272 wins as the TMP-Marian volleyball coach, is resigning from coaching the Monarchs. Dreher went 272-142 in 11 seasons, winning four Mid-Continent League championships and four sub-state championships. In 2017, Dreher led the Monarchs to the 3A state championship. Dreher was named the Kansas 3A Coach of the Year after the 2017 season.

“Although I have much enjoyed my time coaching these young ladies for the past 11 seasons, life experiences have changed my spark for coaching,” Dreher said. “While these past seasons have brought me great joy…I need to step away from the game and take care of myself and my family.”

Below is a list of Dreher’s coaching accomplishments while at TMP-Marian:

The search for the new TMP-M volleyball coach will take place immediately. Any interested persons can contact Troy Schulte at schultet@tmpmarian.org.

Located in Hays, Kan., the Hays Catholic Schools, Thomas More Prep-Marian and Holy Family Elementary, is a Catholic school system serving grades PK-12.  Students come from Hays, the surrounding region, and from countries around the world.  Under the direction of the Diocese of Salina, the Hays Catholic Schools are supported by the Catholic churches of Hays, Catharine, Antonino, Schoenchen and Munjor. At Holy Family Elementary, we are Christ to one another. For over a century, Thomas More Prep-Marian has served young people in the traditions of spiritual growth, academic excellence, and leadership formation.